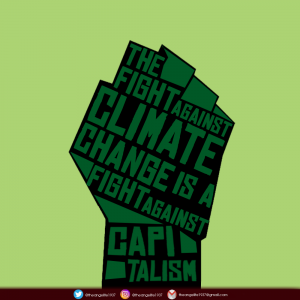 With the worsening environmental conditions, people around the globe have protested against those in power with a call for accountability and genuine change. There is no more hiding with the unusual climate patterns, frequent storm surges, and intensified global warming that we experience. In the name of profit, the rest of the world is forced to face these detrimental effects.

For too long, corporations have fooled us into thinking that it is our fault as consumers. The blame was put on the people while corporate giants continue to produce most of the world’s carbon emissions. With a total of 73% worldwide, the energy sector which includes manufacturing, transportation, electricity and heat, buildings, and other fuel combustion.

Behind it all is the neoliberal capitalist system that continues to exploit natural resources mainly from third world countries and exploit people for cheap human labor to fuel its insatiable desire to accumulate capital.

In the Philippines, we witness the destruction of natural resources one tree at a time while displacing communities out of their homes. Projects such as the China-backed Kaliwa Dam and the San Miguel Corporation funded Bulacan Airport are at the expense of the environment and the people. More recently, the “beautification” of Manila bay by dumping the 26 million dolomite in the bay.

The degradation of the environment because of capitalism leads to unprecedented crises such as climate change, forest wildfires, extinction of different species, and an ever-growing inequality between the rich and the poor. The capitalist system is no longer sustainable thus the need for an economic system that puts forward the interest of the majority arises.

The Angelite, the official student publication of Holy Angel University, stands in unity with everyone who demands a systematic change as a way to save our environment. The youth has been at the forefront of the global climate strike, the one who will inherit the planet that the system has destroyed.

We must continue to struggle against the neoliberal global capitalist system by amplifying our demands for national industry and genuine agrarian reform in order to emancipate ourselves from the semi-colonial grip of imperialist countries.